How do the costs and features compare to similar products? bb

Internet pricing for the double roof drain and sump receiver ranges from $650.00.- $1,000.00 and up + shipping + the labor and materials needed to build the wood sump box which could add another $200.00. The wood sump box would be needed in order to lower the assembly. That’s lost production and added unnecessary costs. 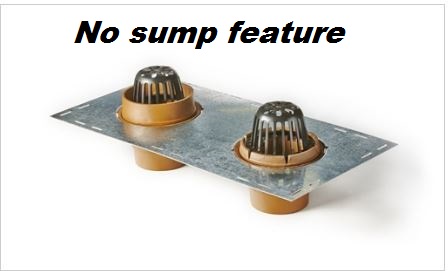 The main feature of the LCP roof drain sump pan that sets it apart from similar double sump receivers is the integrated “sump feature”.  This lowers the roof drains 2-1/2″ below deck. This feature is not engineered into a sump receiver or deck plate that are commonly supplied with a roof drain.

The sump feature effectively makes the roof drains the lowest point on the flat roof. As such, gravity pushes the water into the roof drain and is conveyed to a terminal location.

The sump receiver leaves the roof drains at deck level or slightly higher. This means that your roofing material must be thick enough to slope toward the roof drain. If it doesn’t, pools of standing rainwater will result.

HOW LONG DOES IT TAKE TO INSTALL EACH?

LCP sump pan can be installed in as little as 20 -30 minutes as compared to 2 hours or more for the double sump receiver. Bear in mind that the double sump receiver flanges must be cut down to fit between joists that are 24″ on center. This adds more time to the process and removes metal that is necessary for the waterproofing process. If your joists are further apart than 24″ then the unit will probably fit but you still need to build a wood sump box. The lost production time makes this a liability.

In the case where the roof has thick insulation, a sump are can often be formed from it and sump pan is not necessary.

Therefore, it is ultimately more expensive than using the LCP roof drain sump pan by a factor of about 4 to 1. This means 4x faster jobsite production and 4x lower labor costs.